Bats have become a big issue in homes in the Triangle area including Raleigh, Cary, Wake Forest and surrounding areas. Many people freak out when they discover that they have a bat related issue in their home or building.

Bats are very common in the Triangle and the removal process can be daunting to many, Bat Busters has been dealing with bat issues in the Raleigh area for over 14 years and have created a system that works well when removing and controlling bats in commercial buildings and residential homes.

Bat removal is the process of removing bats by never physically touching the bat which reduces exposure and harm to the night time critters. We practice what is called exclusion of the roosting sites. By doing this we allow the bats to leave on their own and not  being able to return after they have vacated the area. Bat proofing is the single most important thing to do when dealing with bat removal. It’s simple if you get the bats out and don’t seal all of the holes up they will sooner or later be back. 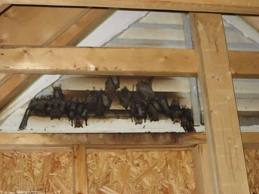 There are many companies in the Triangle and Raleigh area that offer Bat removal services and most are fairly new to the industry. With this being said you must go with a company that has been around for awhile and has dealt with the ongoing process of bat removal throughout the years. Offering a bat control warranty is a great thing but what is a warranty worth if the company does not know what they are doing and are not going to be around long enough to cover the warranty that was put in place.

We here at Bat Buster have been around and are able to back up our bat removal and control services. When we first started in the Triangle there were only two other companies offering bat removal services in the Raleigh area, in a time span of 8 years the number has grown to well over 15-20 companies including some mainstream pest control companies. The problem with this is that many of these companies main focus is not bat removal and is a mere lucrative service that they added to fill gaps in their revenue stream. If your going to get bat removal service done at you home or residents use a company that has stood the test of time.

Bat maternity season is coming to a close here in Raleigh and the surrounding area; bats are starting to become more active in their roosting sites found in homes and commercial structure throughout the triangle area. Pups “baby bats” are in the process of learning how to fly so many homeowners will start to see even more activity around their homes or buildings. During this time bats will leave their roosting sites at dusk and will seek food sources throughout the night returning in the early dawn hours to nestle down for the day.

Homeowners will find droppings and could hear scratching or high pitch sounds coming from these roosting sites, with the maturity of the baby bats the colonies will start to cumulate more fecal matter due to the influx of feeding.

If people see signs of bats in or around their homes or buildings they should take actions to rid their homes of these bats and take exclusion methods to prevent the bats from returning once excluded. Bats can be found in gable vents, ridge vents, construction gaps and chimneys of buildings.  The first sign of bat infestations is their droppings that they leave behind when they are flying in and out of their roosting sites.

Bat busters has been dealing with bat exclusion in the Raleigh area of North Carolina for the last 14 years and has excluded bats from homes and buildings in Raleigh, Cary, Apex, Wake Forest, Holly Springs, Chapel Hill, Durham and Fayetteville.